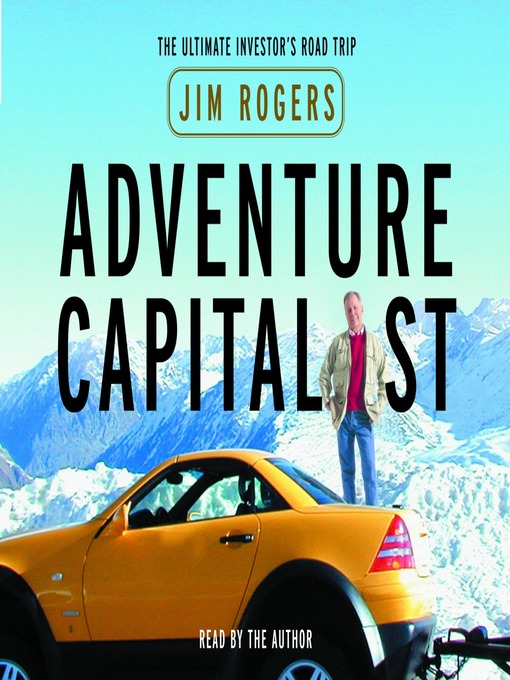 I'm back with another audiobook review. Just finished listening to the audiobook today. It's a short review, so just bear with me on this. The title talk about Jim Rogers who recently advocating commodities as a very viable investment to have. He and Paige start on a journey that took 3 years to complete beginning on 1999. That in return create a Guinness World Record for traveling around the world. He explains why he select Mercedes Benz as a vehicle of choice around the world. He explained that in the poorest/corrupted of nations, you'll definitely found a Mercedes dealer around. With that, he can easily fix the vehicle in the harshest conditions in the world.

He started his journey in Iceland and started to travelled to Europe and to Central Asia and crossing to Russia before embarking to Africa. From there he ventured to Middle East then to India and South East Asia. Then he goes to Australia/New Zealand before heading to Southern America and finally back to his hometown.

The book is a very good introduction about the various country around the world. Since this book was written before The World is Flat, it's a very good read then to understand about how each country work

Some interesting fact
1. Country in Ethiopia that heavily relied on aid from other nations simply because the grain and clothing had gotten there easily and people tends relied on it. This in return cause systematic failure to the farmer and tailor of the country. There's no way for the farmer or the tailor to sell their goods cheaper than those that they get for FREE ! Be very aware of the aid that you've donated for it may ruined a country !
2. When country from former colonist print their money easily without any monetary control (i.e. peg obligations with their previous colonist), this will set their country into a condition where money will become invaluable and inflation will be high
3. There's 2 country in Africa that was called Congo which the author was tricked upon when processed his visa. One being Republic of the Congo and the other one Democratic Republic of the Congo (commonly called Zaire)
4. In Mongolia, country can become very high tech when they can leapfrog the technology for Telecommunications for example (From copper telephone line to fibre optics) without the burden of previous technology

Jim do advocate the potential commodity boom in this book when he compared the last 100 years history. He highlighted that in going to stock market, the return in certain period during 1966-1976 for example is very dismal. One have to pick the right company (He cited the railroad, radio and car industry as an example) when lots of company had gone under.

He also commented about the previous US Governor - Alan Greenspan on his act for Long Term Capital Management and reducing interest rate during the 2001 - 02 that may cause housing bubble. True enough, in America the headlines of subprime mortgage had come up frequently over the past few months.

All in all, the title is easy to understand and fun to listen. I would give a 7.5 out of 10. The title is a little bit dated (Published in 2004). It would be very relevant if it was read by 2004/5 to understand about globalization.
Posted by Victor AY at 9:00 AM

Victor AY
Hi, I'm a analyst working in an IT subsidiary of a Lala company. Specializing in AIX and SAP...